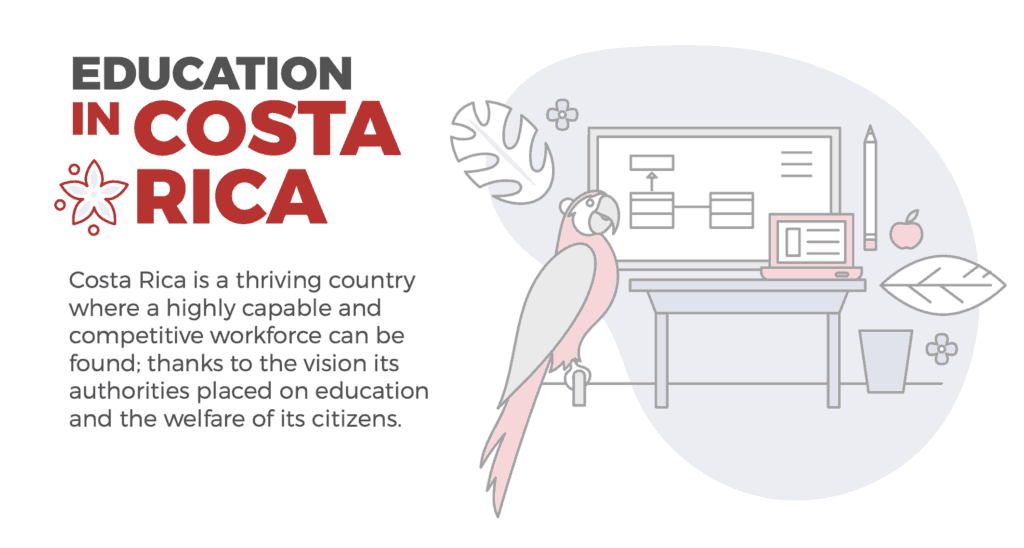 After a civil war in Costa Rica, the army was abolished in 1948. This event became one of the foundations of Costa Rican culture. A year later, work began for the establishment of a new model of State, including social and labor guarantees, solidarity health plans coverage, human rights and education.

In 1957, these efforts proved to be extremely effective through the issuance of the Fundamental Law of Education. The idea was to build a new “army” of Costa Rica, made up of teachers, armed with books and blackboards. The most important goal was to make Costa Rican society the Central American example of solidarity, education and welfare. Through universal and required primary education, Costa Rican society has been able to achieve this goal.

Costa Rican leaders understood that education was the first step in the advancement of society and that the improved education model needed to be extended to higher education. Advances in the creation, consolidation and diversification of state higher education in the 1960s and 1970s were accompanied by the expansion of private universities in the 1990s. This expansion provided a wide range of opportunities for the development of different academic profiles, economic and social research and more development of the country.

As of 2018, advances in the quality of education allowed Costa Rica to have two state universities and one private university considered among the best universities in Central America and Mexico. Many other Costa Rican universities, both state and private, hold privileged places within the world rankings.

On top of the stable political and economic environment, a central location and an oasis of natural beauty, Costa Rica also has incredible human talent to offer.

With an annual 4,000 new graduates going on to engineering and technology careers, Costa Rica is beginning to position itself as an attractive technological development destination for clients from around the world.

A Leader in Technology and Science

How can Costa Rica, a country of only 5 million inhabitants, be able to produce so many world-renowned professionals in the areas of technology, medicine and science? The education in Costa Rica explains it:

The promotion of free and universal education and the commitment to create training and education programs have allowed Costa Ricans to develop their full potential in these areas. Quality standards have been established to accredit graduates of state and private universities, ensuring a comprehensive professional profile, which is both attractive and competitive in the current global market. The commitment to education has paid off through the attraction of medical and technological companies looking to Costa Rica as a destination with a skilled and eager talent selection.

Another essential characteristic of Costa Rican education is the study of several languages.  Bilingual, trilingual and technical studies programs have been implemented since the 1990s that give added value to the Costa Rican workforce.

Universities play a central role in the development of the country. Out of 141 higher education centers that exist in the country, more than half are located outside of the Central region, which guarantees all Costa Ricans access to quality education programs.

The following is an overview of the main universities in Costa Rica, listed in order, according to international quality rankings:

BACK TO ALL POSTS

First Factory Academy – The Next Generation

Software Development Trends Beyond the Pandemic

The Factory Wall: News and Updates from First Factory

Mono to Micro: Challenges and Lessons Learned in a Transformation Journey

Drive the bus: How to use the event bus pattern for your ETLs

The Benefits of Staff Augmentation

How to Adopt Inclusive Hiring in Software Development

The Making of Your Nearshore Development Team